"Finally, be strong in the Lord and in his mighty power, put on the full armor of God so that you can take your stand against the devil's schemes. For our struggle is not against flesh and blood, but against the rulers, against the authorities, against the powers of this dark world and against the spiritual forces of evil in the heavenly realms." - Ephesians 6:10-12 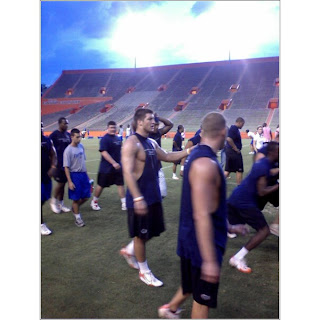 Stacey and I attended the The University of Florida Gators Charity Challenge on Friday. The strongman competition showed fans how hard they’ve worked this summer and helped raise money for charity.

The Gator team, which usually holds a strongman competition toward the end of every summer, chose to open this year’s competition to the public for the first time while raising money for a good cause. 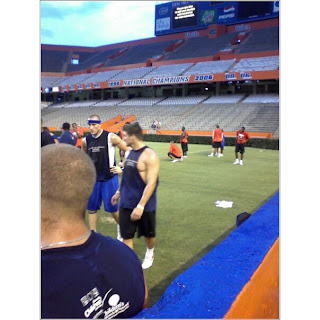 Stacey and I decided to donate to the Susan G. Komen Breast Cancer Foundation as a friend of ours was recently diagnosed with Stage 2 breast cancer and had a double masectomy just a day before the strongman competition.

We supported and cheered for the Gator team wearing their pink breast cancer awareness shirts. Ironically, the team we picked, led by Gator team captain and offensive lineman Jason Watkins, ended up winning the challenge! 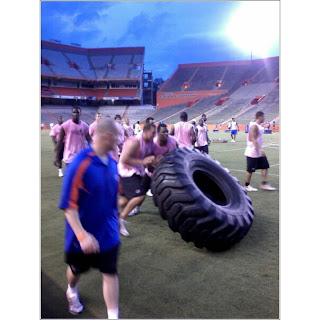 At the end of the competition we even had a chance to snap a couple pictures with Tim Tebow. I only had a brief moment to talk to Tim as he had already spent a lot of time after the competition signing autographs and taking photos. 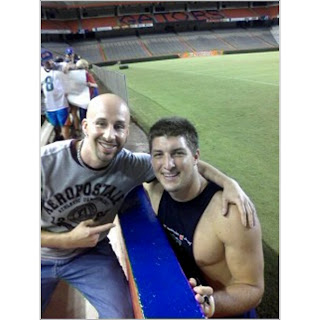 When I called him over for a photo, I expressed my appreciation of him as a role model and invited him to attend our church if he was ever interested.

As he began to leave, I asked him for another photo, this time with Stacey. I mentioned that she was a big fan and would really appreciate it.

I joked with him that Stacey said she was going to divorce me to marry him (she had joked about that earlier that evening!). He got a good laugh out of that, and I think I embarrassed Stacey just a little. 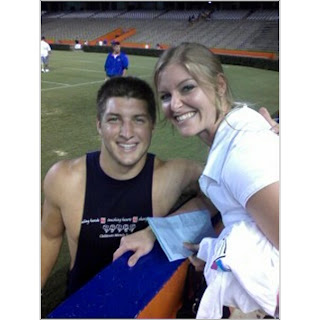 I wish I had a few more minutes to speak with him, as there have been many things I've wanted to talk to him about regarding God, Christianity, his humility and how his actions have even helped me humble myself (no easy feat!).

I've seen Tim on campus in the past, and I'm sure there will be another chance for me to see him and speak with him.

Tim is an incredible role model and exemplifies what being a Christian is truly about. He has a passion for children (he chose the Children's Miracle Network as his team's charity for the strongman competition) and has been on many mission trips to various countries.

He was brought up in a good Christian home and taught Biblical values and beliefs. Tim is very humble and Christ-like. He has his priorities in order (1. God, 2. Family, 3. School, 4. Football) and has been blessed by God in so many incredible ways.

He is an ambassador for Christ, and I can see that God will use him for many special things beyond football.


Read more about the Strongman competition here - Click me!

Nate dragging a heavy sled with a weighted Xvest during a strength and conditioning workout.

Nathan James
Nate is passionate about health, fitness and athleticism. He is a Christian who wants to use his passion for health and fitness to help others (he helps all people regardless of their religious beliefs). Nate has a Level 1 Youth Fitness Specialist certification through the International Youth Conditioning Association (IYCA) and plans on opening a fitness-based business in the near future. Nate trains people out of his private garage gym to help them reach their strength, fitness, health and fat loss goals. He has read hundreds of articles, books and studies on health and fitness and has more than 15 years of "in the trenches" experience through trial and error ranging from weight training, Olympic lifting, strength and conditioning, fat loss training and more. He enjoys spending his time helping others on various fitness forums and now through his blog.