Dear Parents: Your Child is Fat!

"Discipline your children while there is hope. Otherwise you will ruin their lives." - Proverbs 19:18

According to an article posted in Time, School children across England will soon have their Body Mass Index (BMI) tested as part of a new effort to tackle the growing problem of childhood obesity.

Parents will be sent a letter telling them whether their child is underweight, a healthy weight, overweight or very overweight. The letter will also include leaflets giving advice on eating healthily, physical activities their child might do and the risks of being overweight.

So, are parents really failing to notice their little angels piling on the pounds? Yes, says the U.K.'s Department of Health. 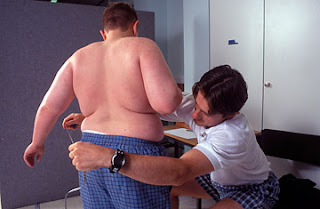 Still, it pays to break the news of a child's problem gently. Following the advice of numerous obesity experts, the Department of Health has decided that the name of the final, portliest category — very overweight — was a more sensible choice than obese.

"Preliminary findings of the survey suggest that many people who would be defined clinically as obese find the use of the term obese highly offensive and would stop listening to further advice."

The softly-softly approach doesn't please everyone. "To shrink from using the word obesity is really ducking an issue," insists Dr Colin Waine, Chairman of the National Obesity Forum. "It does not have to be used in a judgmental or insulting way: if a child is obese, then the parents should know that they are obese. We must make parents know that the lifestyle of the family needs to be modified."

Statistics on childhood obesity in Britain make grim reading. Figures from 2006, the most recent numbers, show that nearly a third of all children aged between two and 15 are overweight or obese, an overall increase of 11 percent from 1995.

The U.K. childhood obesity rate is comparable to that in the U.S., where obesity in children aged between six and 11 has tripled over the past three decades, which may be why a few U.S. states already send reports on heavy kids home to parents. The College of Natural Resources at the University of California, Berkeley, published a paper in November 2006 describing the "risks and benefits of BMI reporting in the school setting," and in May 2007, Wyoming started a program in which students' report cards came complete with their BMI.

Based on current growth rates, obesity is predicted to cost the wider community of the U.K. around $100 billion a year by 2050, according to the Department of Health. "The Government must lead on action across society to tackle obesity. Engaging parents in this issue is essential to achieving success in instigating behavioral change."

"This is a really serious problem," says Dr Waine. "We're in danger of producing a generation of children with a shorter life expectancy. We can't just say that's acceptable."

Articles like this are one reason why I'm getting a certification from the International Youth Conditioning Association (IYCA). Our children deserve better. Although I believe that parents should be the ones correcting bad nutritional habits and encouraging their children to get regular exercise, the reality is that many parents are neglecting their own health and don't know how to help their children or serve as good role models.

There are no short-term fixes for childhood obesity. A long-term approach is key to correcting obesity and other issues that children face these days (diabetes, heart disease, high blood pressure, etc.). With a certification from the IYCA, I will have the tools I need to help make a difference.

Nate dragging a heavy sled with a weighted Xvest during a strength and conditioning workout.

Nathan James
Nate is passionate about health, fitness and athleticism. He is a Christian who wants to use his passion for health and fitness to help others (he helps all people regardless of their religious beliefs). Nate has a Level 1 Youth Fitness Specialist certification through the International Youth Conditioning Association (IYCA) and plans on opening a fitness-based business in the near future. Nate trains people out of his private garage gym to help them reach their strength, fitness, health and fat loss goals. He has read hundreds of articles, books and studies on health and fitness and has more than 15 years of "in the trenches" experience through trial and error ranging from weight training, Olympic lifting, strength and conditioning, fat loss training and more. He enjoys spending his time helping others on various fitness forums and now through his blog.